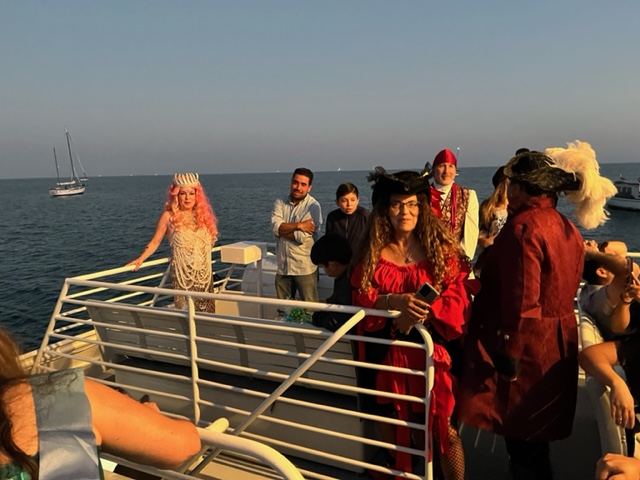 The seas were calm and the evening sunset was spectacular as the Condor Express set sail into the Santa Barbara Channel.  Those aboard were guests of the Santa Barbara Eastside Society’s fundraiser, Pirates and Mermaids dance cruise.

On Friday, September 16th, supporters of the Society boarded the Condor Express in full pirate and mermaid regalia.  It was all for a good cause to raise money for the Trick or Treat on Milpas Street and the Milpas Holiday Parade.

DJ Joey De Salas provided very danceable funk, boogie, rock and salsa to get the party started.  Captain Drew Wakefield hosted the auction and raffle event, which raised a significant amount of booty for the parades. The sunset was magnificent as Captain Dave of the Condor Express slowly sailed down the coastline as crewmembers snapped pictures.

Best dressed pirate and mermaid awards went to Jacqueline Abood and Carlos who looked spectacular in their costumes.

All-in-all the crew had a rocking good time as people shook their booty, ate delicious Filipino food, won lots of prizes and everyone made it back to port without getting seasick.

Thanks to Captain Dave and his crew, Drew Wakefield for his clever auctioning skills and silver-tonged comments, the SBES board including Chris Barros, Maria-Elena De Guevara, Amie Kang, Chris Pisano, Jessie Espinoza and Sebastian Aldana, Jr., and all the people who supported the Santa Barbara Eastside Society.

Fare-thee-well until next year mateys!

A Tour of Milpas Street

It isn’t every day that the Mayor shows up to your neighborhood, especially with the new interim police chief in tow, but that’s what happened on Thursday, July 21st, 2022.

The tour was organized by Barbara Anderson, the new Senior Assistant to the City Administrator for the City of Santa Barbara.  Joining her were local citizens Ms. Chris Barros, Mr. Jessie Espinoza, Ms. Natasha Todorovic-Cowen, volunteers from the Police Department, other dignitaries, and yours truly.

The objective of the tour was to have the mayor see first-hand what residents and businesses are facing on Milpas Street, and he experienced quite an eye full.

For starters, our little group visited the Ramirez Floor Coverings on 824 Cacique Street.  There we found several homeless individuals hanging out on the Ramirez stucco wall and gawking as we walked by.  No harm, no foul.

However, after speaking with Mr. Ramirez we learned that individuals are constantly on his premises, urinating, yelling and vandalizing property. This was very upsetting, and I personally observed one of our group members being harassed as she waited outside. These individuals were not necessarily from PATH, which resides next door but were there none-the-less.

As we left, the mayor promised the owner more patrol by non-sworn officers known as Volunteers In Policing or VIP services.

Our next stop was the Cacique Street Underpass where we found someone passed out on the sidewalk.  Luckily, one of our group members, Ms. Kathrine Soto-Vasquez, the new SB Act coordinator, spoke Spanish and was able to translate for the person.  Although he wasn’t arrested, he was warned about violating the Sit and Lie ordinance which was passed last year by the city.

Two years ago, Cacique Street was spic and span having been cleaned up by the City of SB and CalTrans. Today, it looked shabby, dirty with overgrown weeds and trash right on the sidewalk.  This was pointed out to the mayor who agreed to address it immediately.  Frankly, it can’t happen soon enough.

On the way back, we spotted someone camped by the Stereo Shop smoking from a bong.  While this is not an illegal activity, the person was sleeping and living under a palm tree by the business.  Police Chief Arroyo tried to speak with him and offer him services but to no avail.  We ended the tour by discussing what could be done about the situation. Here are the recommendations which were sent to Mayor Rowse:

Overall, it was a very productive afternoon, and I believe that it was an eye-opener for city officials who do care about our situation and environment on the Eastside of Santa Barbara.  What needs to happen now is less talk and more action.

The Lines They are a Changing

Back on January 2022, I was pleased to discover that the City of Santa Barbara had posted an invite on the Nextdoor app inviting all citizens to participate in the redrawing of boundaries of District 1. To the city’s credit, this public information spot was published in both English and Spanish.  Unfortunately, it was the only one I saw.  I am confident that working with the new Public Information Officer, Ms. Shelly Cone, that better outreach to the community will be in store.

The Independent Redistricting Commission (IRC) has recommended the City Council adopt their recommendations of map 101Re, which included the beach front, Lower State Street and the Funk Zone district.  This is a positive event for the Eastside because it means a majority Latino District will now qualify for Community Development Block Grants (CDBG), which will be used to improve the community. The unfortunate tradeoff is that the upper Eastside corner running from East Cota to North Voluntario Street, up De La Guerra Road to Alameda Padre Serra and South to East Cota will now be placed in District 3. This change was based on the 2020 Census which was used by the IRC.

Recently, the Census Bureau published their finding for the 2020 Census.  The Bureau unequivocally stated that it undercounted Blacks, Hispanics and Native Americans by 4.99%.  This is not the first time this has happened as the Bureau stated that their findings “also include some limitations — the 2020 Census undercounted many of the same population groups we have historically undercounted, and it over counted others.”  Despite all this, the data was used to make the decision in drawing up new redistricting lines.

Nevertheless, if you live in the upper Eastside Corner, you will now reside in District 3, Councilwoman Kristen Sneddon will now be your new representative.  I have found her to be articulate, informed and an advocate for her district and am looking forward to meeting with her.  Although the lines have changed. The Eastside needs to continue to advocate for continued improvements and representation to beautify and upgrade our community.

The Eastside is alive and well again after a spectacular holiday parade on December 11th that featured Mr. John Palmintari and Mr. Victor Reyes as celebrity announcers. It also showcased local talent in the form of bands, dancers, floats, a lively Santa Claus and a guest appearance by the Grinch.

After postponing the Milpas Holiday Parade last year due to Covid19, the Santa Barbara Eastside Society rallied for the occasion and organized a season extravaganza by hosting its 67th Christmas parade.

The parade was a good harbinger for the New Year and people from the community flocked to enjoy the festivities and partake of the local businesses which remained open for the event.

New and exciting activities are being planned by the Society for 2022.  The Santa Barbara Eastside Society wishes everyone a healthy holiday and a Covid free New Year.   Looking forward to seeing everyone in 2022. 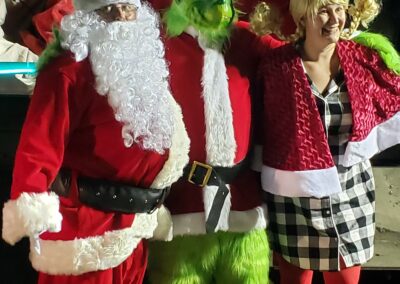 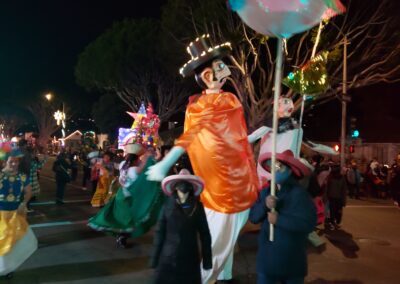 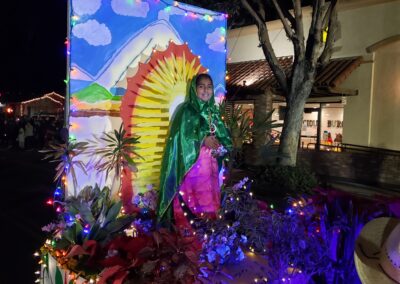 A Special Thanks to Our Sponsors